Google has been making changes to its Play regulations and Android APIs. This was done in response to user discontent and requests for improvements. Google made this choice after consulting with the developer community, based on user demands and feedback.

User trust is critical to Google Play’s success. Users’ downloaded apps should not include hazardous or objectionable content, should not behave unexpectedly, and should not treat user information incorrectly.

If you follow the Google Play developer policies and instructions, you may create applications that contribute to the overall trust that all users have in Google Play.

Google’s New Android Developer Policies: What You Should Know?

Following changes to Google’s new Android Developer Policies, which went into effect in October 2018, Android app development services can no longer use Call Log and SMS permissions unless they are used to establish the application’s core functionality.

When Google proclaimed the new regulations, developers were given 90 days to bring their apps into compliance with them, with non-approved apps being removed from the Play Store.

Attempting to reclaim rights already granted to Android app development Services, on the other hand, has caused a great deal of consternation among Android developers and users of applications that have had functionality that rely on those rights taken removed.

Google announced changes to the review system for resolving concerns to policy changes and execution methods on April 15, 2019. 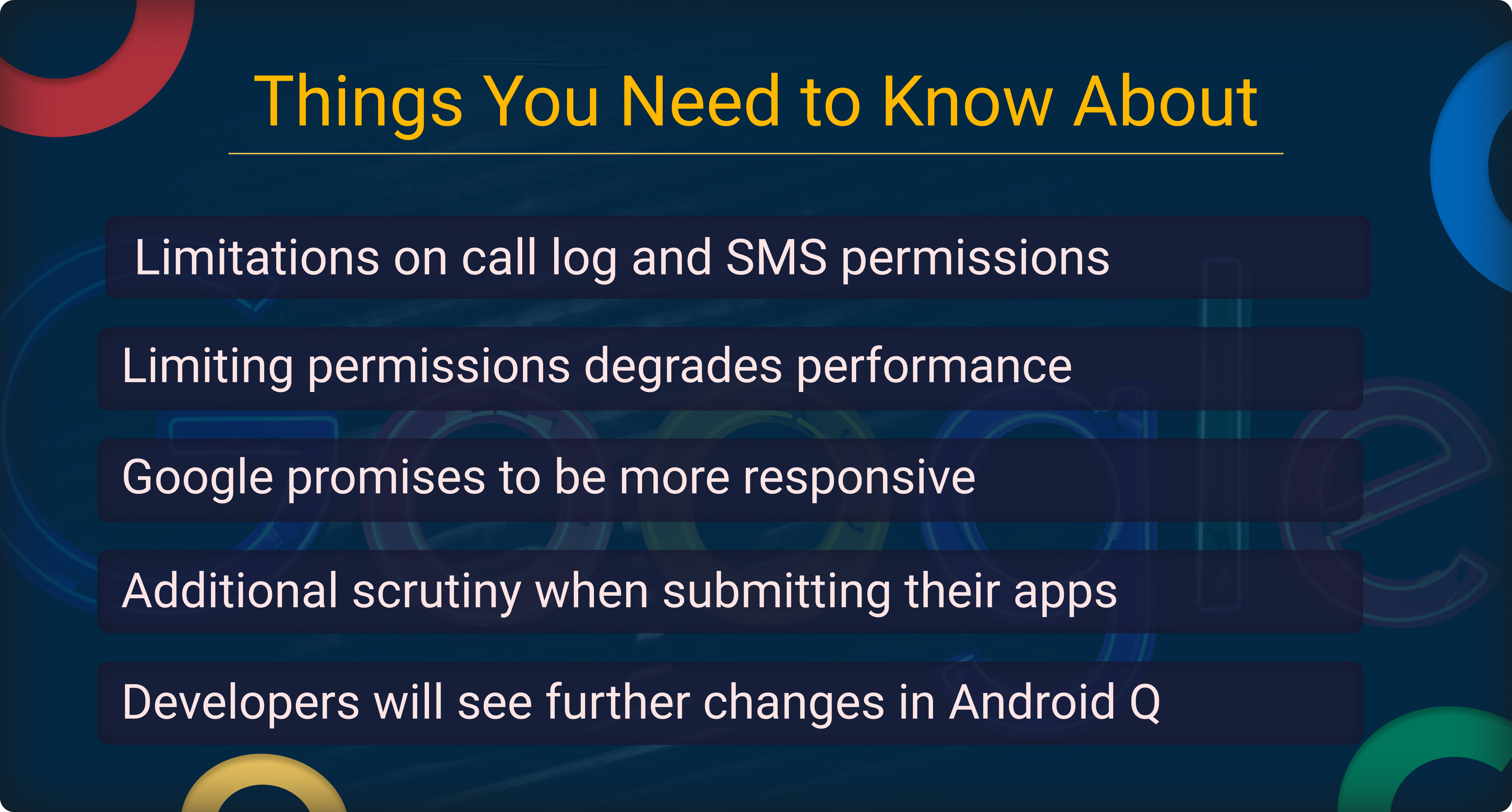 Under the title of Project Strobe, Google announced an overhaul to how personal information might be used, including how third-party access to private data via APIs is made available. And this declaration was made in conjunction with plans to shut down Google Plus due to the discovery of an API issue that allowed unauthorized access to data.

Meanwhile, Google stated that a few Android applications request authorization to access a user’s phone and SMS data. In the future, Google Play will limit which applications are permitted to seek permissions.

These permission requests may only be made by an application that you have set as your default application for sending text messages or making phone calls. However, there are certain exceptions, such as backup and voicemail software.

Despite the fact that Google states that they have always asked developers to limit these permission requests to only what is essential for their application to run and to be honest with users about what information they provide.

Android had a wide range of permissions that provided developers with greater access. Alternative APIs, according to Google’s proposal, provide for more raw access, allowing developers to reapply functionality.

According to the organization, the unpredictable limitation of these rights caused great concern among developers, as Google’s ability to communicate what was and was not authorized was often imperceptive, difficult to finish effectively, and unclear.

The self-sufficient developers relied on community boards like Reddit and Google’s Issue Tracker to register their complaints, with the maker of EasyJoin Pro, an application that allows calls and SMS to be delivered from remote devices, a feature specifically limited to the Pro version, stating by Google that the announced feature is permitted, but they determined it to be unimportant.

Similarly, the creator of ACR Call Recorder was denied permission to record phone calls, and the creator of the automation program Tasker was set to lose the same capability, albeit their plea resulted in task automation being listed as a permitted exception. 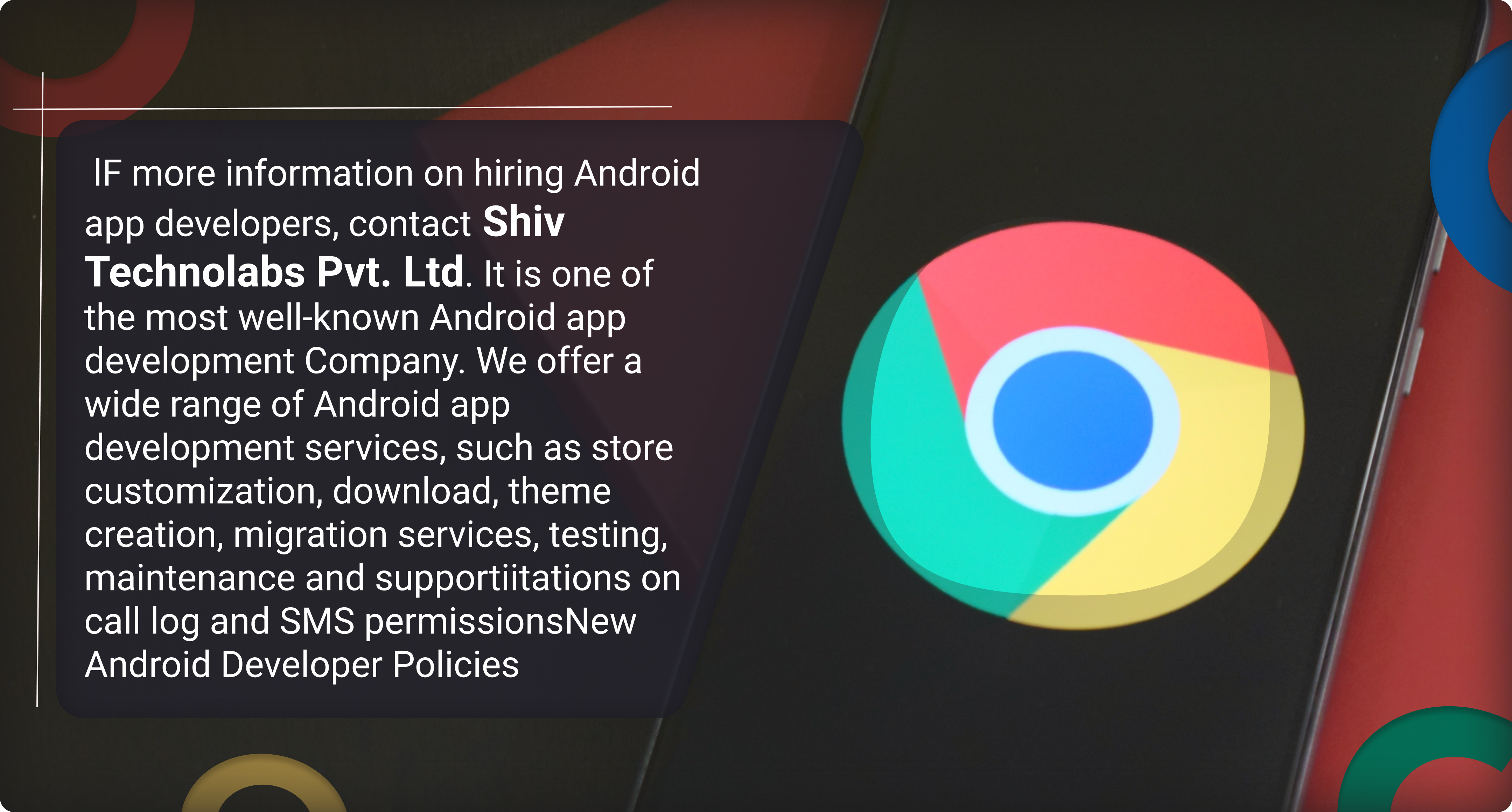 Google approved comments, indicating that it took a long time to receive replies on whether applications met policy requirements and that the method for getting a decision was cumbersome and time-consuming.

The corporation also accepted the notion that their judgments were automated, with no human involvement, and that it was difficult to contact someone who could provide information on Google’s policy choices and the most recent use cases presented by developers.

Google promised to examine and improve the request method, including the inclusion of application instructions in every execution email, and said that the application form containing information may also be found in their Help Center.

Furthermore, Google claims that humans, not bots, currently examine each delicate choice, but that they are improving their communication to provide more targeted replies and that they are optimizing their personnel to assist speed up the application process.

Google is targeting developers who create new accounts after being banned, which has an impact on new developers. Google indicated on April 15, 2019, that they would be spending extra time shortly to analyses applications produced by developers that do not even have a track record with Google.

This will allow Google to do more extensive monitoring prior to approving applications to go live in the Play Store, as well as make more accurate choices on developer accounts.

According to DoubleVerify, typically, Hire Android App Developers generating applications that exhibit a lot of advertising, or excessive offerings that are not showcased, are a developing concern, with the total number of apps involved in fraudulent ad impressions increasing by 159 percent from 2017 to 2018.

Android Q will also make it difficult for developers to manage scoped storage, prompting comments on Google’s Issue Tracker. Scoped Storage prevents the use of current API calls for writing to or reading from external storage.

Finally, the efforts to employ the previous technique were likewise silently futile due to the lack of file system visibility that is available to programs when developers utilize the API.

Although photographs, video, and audio will still be available, this change renders FTP programs and file managers ineffective.

In a nutshell, whether you are a seasoned or inexperienced developer, you must adhere to new Google Play guidelines and standards in order to create apps that contribute to the general confidence that users have in the Play Store. For more information on hiring Android app developers, contact Shiv Technolabs Pvt. Ltd. It is one of the most well-known Android app development Company. We offer a wide range of Android app development services, such as store customization, download, theme creation, migration services, testing, maintenance and support.

Know About The Tire Balancing And Why Is It Necessary?